"I was pleased when my debut was over"

Benjamin Goller has been one of the surprises of the season. The 20-year-old from Schalke’s impressive performances in preseason were rewarded by Florian Kohfeldt, who gave the youngster his first Bundesliga start. “It was an incredible feeling,” Goller says, looking back on his first appearance in Germany’s top division. After his injury in summer preseason training, the U20 international is back in Bremen and is looking forward to more appearances in a Werder shirt.

WERDER.DE spoke to  Benjamin Goller about his recent trip with the Germany youth setup, the game against his old club Schalke, and his first months with Werder.

WERDER.DE: You were on your travels with the Germany U20s on Monday evening. What did you take away from the experience?

Benjamin Goller: “It was a good experience, especially since we won 2-0 against Portugal. The journey was a little tiring, but I feel good and injury-free, which is why everything’s OK.” 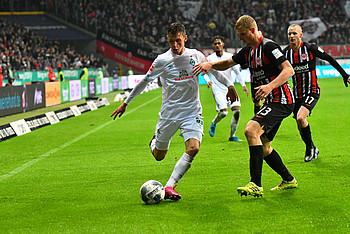 Benjamin Goller has been able to prove himself again and again with each passing game (Photo: nordphoto).

Benjamin Goller:  “The style of play varies from team to team. That’s a big difference. Just like the different players. In the national team all the other players are as old as me and we don’t have a lot of experience. The games can get really wild.”

WERDER.DE: On the weekend Werder face Schalke, your ex-club. Doe knowing that give you extra special motivation for training this week?

Benjamin Goller:  “I always give 110% in every training session, so I wouldn’t say I’ll train any differently even though it will be a special game against my former club.”

A change of scenery in the Bundesliga

WERDER.DE: With Werder you met your ex-teammate Levent Mercan, also from the Schalke youth setup. Have you talked to him about the game?

Benjamin Goller: “I was actually together with Levo in a room on national team duty. We talked a bit about our personal situations and our clubs. We didn’t speak specifically about the game, but I’m looking forward to seeing him at the weekend.”

WERDER.DE: As opposed to Mercan, who managed to make the transition to the Bundesliga squad, you decided to move to Werder. What were your reasons for transferring?

Benjamin Goller: “I got a very good education at Schalke, but I decided to take the next step. I had a lot of great conversations at Werder, especially with Florian Kohfeldt, and Bremen is a great club, so I decided to transfer.”

Kohfeldt assured me that I would stay in the team

WERDER.DE: During preseason you suffered a muscle tear just before the second training camp. How do you deal with that situation?

Benjamin Goller: “At that point I was really battered and broken. An injury in preseason is bad for every player. When the diagnosis was confirmed, Florian came straight to me and told me not to worry. He assured me that I would stay in the team, which made me feel positive.

Thrown into the big time 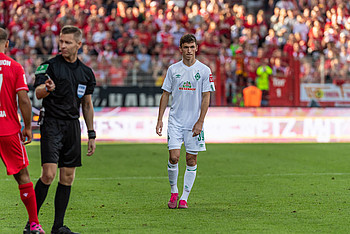 WERDER.DE: You made your Bundesliga debut relatively soon after coming back from injury. Did you expect that?

Benjamin Goller: “No, I didn’t. I obviously benefited from the fact that we had a number of players out injured. I think I took my chance when I got it.”

WERDER.DE: What kind of memories did you take from your debut against Union Berlin?

Benjamin Goller: “It was an unbelievable feeling to make my debut. The game was quite hectic and we just won 2-1. We were desperate to win the game. I was pleased when my debut was over and that we’d taken the three points (laughs).”

WERDER.DE: You played in the Champions League for Schalke last year. Did you put yourself under pressure to make your Bundesliga debut after waiting so long for it?

Benjamin Goller: “No, not at all. As a young player, I simply have to take every minute I can get. Then I have to work on myself, analyse my game and work out what I did well and what not. You often don’t improve if you put yourself under too much pressure.”

Goller: Kohfeldt was a big factor in my coming here 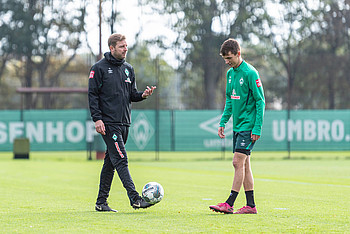 WERDER.DE: Florian Kohfeldt has given you a chance to play so far. What role is he playing in your development?

Benjamin Goller: “He’s incredibly important for me. He often speaks to the younger players and gives us tips on how to improve. He discusses our performances and where we need to improve. This is key for my development.”

WERDER.DE: How is Kohfeldt different to your previous coaches?

Benjamin Goller: “In the way that he is with us. He often plays darts or table tennis with the players. I’ve never had a coach who would do that – they normally would just stay in their offices.”