“Finally some points on the board”

The reaction to the Düsseldorf game

After an intense 90 minutes of football, SV Werder put an end to their losing run, pick up three points in the first match of the Rückrunde against a direct competitor and keep their first clean sheet of the season. Niklas Moisander described it as, “an almost perfect start to the Rückrunde.” The only negatives for Florian Kohfeldt’s side were the injury to Kevin Vogt and the sending off of captain Moisander. “We won the game. It wasn’t glamorous, but it was deserved. Overall we played the better football throughout the match,” head coach Florian Kohfeldt said after a determined performance. It’s a good afternoon for the Green Whites, but they now need to turn their attentions to next week’s match.

Niklas Moisander: “It’s a deserved win. We didn’t play amazing football, but no one expected that after the first half of the season. We had the right mentality here today and played as a team. We need to do that in every game. However, that was only just the first step.”

Davy Klaassen: “We played with confidence today, which is something we didn’t do in the first half of the season. We want to, and have to, continue like this. Both sides went had phases when they were on top. We could have played better, but a 1-0 win against one of our direct competitors is something we have to be happy with.” 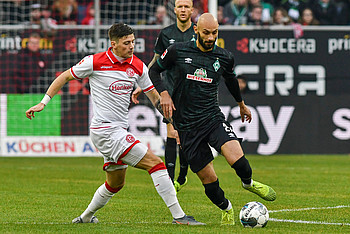 Ömer Toprak made his return to the starting XI (Photo: nordphoto).

Leonardo Bittencourt: “We’ve gained a lot of confidence. We’ve had to put up with a lot of setbacks recently. It was a decent game against one of the teams around us in the table.”

Marco Friedl: “We knew just how important it was before the game. We wanted to overtaken Düsseldorf after the game and we’ve managed to do that. It was a battle right up until the final minute. There were times in the first half of the season where we played well but ended up without any points. Today we finally got what we deserved.”

Ömer Toprak: “The team gave it their all. We’ve lost a lot of games and ended up in the relegation zone, so we lost a bit of confidence. We’ve now taken an important step, kept a clear sheet and played with intensity, but there’s still a lot of work to be done.

Florian Kohfeldt: “We won the game. It wasn’t glamorous, but it was deserved. Overall we played the better football. We can enjoy it, but only briefly. Now we need to look towards next week.”

On the first clean sheet of the season:

Niklas Moisander: “It means a lot to me because we didn’t get any in the first half of the season. It’s really important for our confidence; we defended really well today. Kevin is a fantastic player with a lot of experience. We’re happy to have him, and to have Ömer back as well.”

Ömer Toprak: “We finally managed to do it, but we still have a lot of work to do. Niklas and I were both injured for a long time and have barely played together in the last six months. We’re happy that we won the game, but it’s just the first step.”

Florian Kohfeldt: “We had three very good defenders on the pitch for us today. They didn’t need a long time to work out how to play together. Kevin made some really good passes and Ömer and Niklas stepped into midfield well. Overall it worked really well.”

On the sending off:

Niklas Moisander was shown a second yellow in the final few minutes of the game (Photo: nordphoto).

Niklas Moisander: “I saw that Pavlas tried to come out and claim the ball, and two Düsseldorf players knocked him on the head. I have nothing to say, just that my emotions got the better of me. The sending off is really disappointing. But I can’t play without my emotions. Two of my players were lying on the floor!”

Florian Kohfeldt: “I don’t blame Dr. Brych at all. We were told that some rules would now be interpreted a bit differently. Sure, Niklas ran towards two Fortuna players, but two of our players were lying on the floor and Niklas was just showing his emotions. I don’t understand this rule. Why do people make these rules when they have no idea how the game works. Again, I’m not blaming Dr. Brych because he had no choice, but these rules are insane.”

Niklas Moisander: “I haven’t heard from him yet. I hope that he’s okay. He’s a fantastic player and a really good guy.”

Ömer Toprak: “It’s really annoying for us that Kevin has got injured straight away; but that’s just how it is. I don’t know what else to say.”

Florian Kohfeldt: “I was worried about Pavlas at first; two players went into him with their feet. I only saw that Kevin was hurt as well a few moments later. He was unconscious for a bit. He’s currently on his way to the hospital and he has now regained his consciousness. But I’m now blaming any of their players; this sort of thing happens sometimes.”

Veljkovic to feature in strong squad

Ömer Toprak misses out through injury

Chong back as normal, Rashica continues to rest

13.09.2020 / First Team
Your web browser ist outdated.
The web browser you are using is no longer supported.
Please download one of these free and up to date browsers.
Why should I use an up to date web browser?