The final international break of the year is over, and football has made its long-awaited return to the Osterdeich. After failing to win any of their last seven matches, Werder are looking to get back to winning ways. Over the last few weeks, it was the often quoted “finishing touches” that were cited as being the difference between a win, draw or a loss. The Green-Whites are hoping for a different outcome against FC Schalke 04 on Saturday, 23rd November (15:20 CET). “We’ve used the last week in order to talk things over amongst ourselves. As a result, we’ve been able to head into the past few days with a clear head,” Florian Kohfeldt said during a pre-match press conference. Despite the lack of points from the last few games, Werder are looking to keep their cool in order to finally pick up another win.

The squad: As was the case over several of the last weeks, another key player has returned from injury to re-join the squad. After undergoing a knee operation in August, Ludwig Augustinsson was finally able to take part in his first training session of the season. “He’s available for the weekend, and is definitely a candidate to start,” said head coach Florian Kohfeldt. Aside from Toprak, Bartels, Möhwald and Füllkrug (all long-term injuries), the Werder head coach has a full squad to choose from, with the exception of Niklas Moisander.

Kohfeldt: Turning our weaknesses into strengths 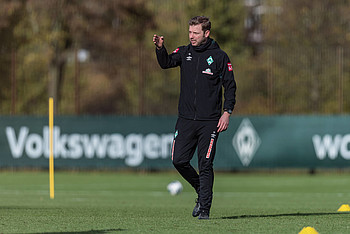 Florian Kohfeldt is looking to move up in the table this weekend (Photo: nordphoto).

The head coach on the match: Kohfeldt was full of praise for head coach David Wagner, his counterpart at Schalke. The Royal Blue coach has completely turned his squad around and created a “tight-knit unit,” according to Kohfeldt. United behind a solid philosophy, the last few months have seen Schalke emerge as a team that “sets itself apart with their ability to play a variety of formations.” Despite their unpredictability, Kohfeldt has identified a constant within the weekend’s opponents: “Their defence plays with a lot of intensity and aggressiveness, in order to provoke their opponents into playing long balls and to make mistakes.” After winning the ball, they then bring their wingers into the mix in order to switch over to a “dangerous counter-attack.” It will be key for the Green-Whites to shut this down. Werder have also been practicing their set-pieces, focusing on both defence and offence, where they could prove the key factor to deciding the game in their favour.

Maxi set to follow in Sargent and Friedl’s footsteps? 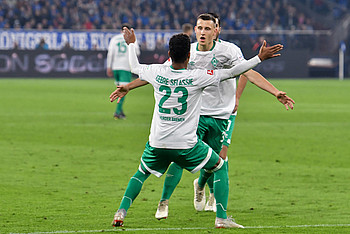 Maximilian Eggestein scored the winner for Werder in the Hinrunde against Schalke last season (Photo: nordphoto).

The last meeting: Werder were Schalke’s bogey team last season, defeating them 2-0 and 4-2 in the Bundesliga, before knocking them out of the DFB-Pokal quarterfinals. Milot Rashica scored the opener in front of 60,000 fans around the hour mark, before Davy Klaassen ensured Werder’s move into the semis with another goal. Two goals scored and none conceded? That’s a result that would likely please most Werder fans this upcoming Saturday.

Maxi’s shining moment: Werder’s midfield man Maximilian Eggestein has more to celebrate than just the three wins over Schalke last season. The 22-year-old scored his debut Bundesliga goal against the Royal Blues two and a half years ago, and also scored his first-ever professional brace against Schalke in the Hinrunde last season. Eggestein can ask his teammates Josh Sargent and Marco Friedl for tips, after they both scored braces for their respective national teams over the international break.

The officials: Benjamin Cortus from Röthenbach will take charge of the match. The 37-year-old will be supported by linesmen Florian Heft and Thomas Stein. The fourth official will be Marcel Pelgrim, and the video assistant referees will be Dr. Matthias Jöllenbeck and Arno Blos.