SV Werder Bremen have a long week of training ahead of them. The Green-Whites will only be in action on Sunday (6th December, 15:30 CET), as they host VfB Stuttgart at the wohninvest WESERSTADION. Clemens Fritz, head of scouting and professional football, delivered his weekly update on the most important topics of the upcoming days. He took stock of the current season, and s also taking a positive outlook on what lies ahead.

...the last game: “None of us are happy, neither myself, the coaching staff, or the team. We made simple, unnecessary mistakes. We’re not dwelling on this game, but are instead focused on analysing the mistakes and taking a positive outlook on what’s to come. Positive thinking is key in order to be able to perform at your best. But, I’ll be honest: I’d rather lose like that once, than play well all the time and not be rewarded.”

...the season so far: “We said from the start that it would be a tough season. Overall, we’re happy with the way things have gone so far and the progress made, but we’re also not naïve and were expecting some setbacks. The squad is young, and in Wolfsburg we saw that we always need to give our all. Of course there will always be comparisons made to last season, that’s something we have to live with. We’re only focused on ourselves. We believe in our strengths and will continue to focus on our work.”

...the training sessions: “I get a positive feeling from what I’m seeing from the boys in training and in the games. The competition within the squad is good for us, which is why I have a good feeling for the upcoming weeks.” 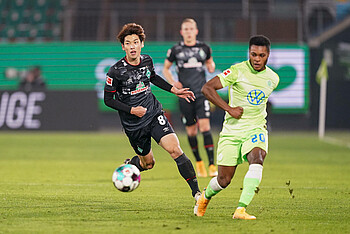 ...Yuya Osako: “He’s a very talented player, but like everyone else, he needs self-confidence. I’m not as critical of him as some other people are. When he’s in top form, his skills are of benefit to the team. He is also constantly working to improve and to deliver the best possible performance.”

...Patrick Erras: “He’s coping well with the difficult situation he currently finds himself in, and is giving his all in training. He has a great personality and is keeping positive. I’m convinced that he will see some playing time this season.”

...the squad: “We’re keeping an eye on Jiri Pavlenka and Nick Woltemade’s workload, which is why they will only return to train with the team on Tuesday. Ömer Toprak, Ludwig Augustinsson and Leonardo Bittencourt will participate in parts of team training. Milos Veljkovic, Josh Sargent and Niclas Füllkrug are training individually. We will have to wait and see how the week goes for Milos and Niclas. It remains to be seen whether or not they’ll be fit for Stuttgart.”

...VfB Stuttgart: “We need to be focused. Stuttgart aren’t your typical promoted side. They are a good team, and have a good mix of youth and experience. They play with intensity and have earned the points they’ve picked up this season. They caused Bayern a lot of issues on the weekend, and certainly could have taken something from the game.”

...the end of the year: “There won’t be much time off during the winter break, as we will be looking to fully prepare ourselves for the game against Union Berlin on 2nd January.”