A hard-fought point on the road!

Werder and Freiburg share the points with a 1-1 draw.

Just as expected, it was a tough and competitive match against a difficult opponent. However, SV Werder tackled the challenge head-on and came away with a well-earned point after the 1-1 draw at the Schwarzwald-Stadion. SC Freiburg took the lead for the third game in a row as Philipp Lienhart struck in the 15th minute to give the home team the lead. However, it wasn’t long before Niclas Füllkrug was able to equalise from the spot in the 25th minute, after Leonardo Bittencourt was brought down in the box. Kevin Möhwald also made his Bundesliga comeback after more than a year out with injury.

Line up and formation: Head coach Florian Kohfeldt made one change from the home victory against Arminia Bielefeld. Following the deadline day departure of Davy Klaassen, Werder academy graduate Nick Woltemade was brought into the starting XI. With captain Niklas Moisander on the bench, newly appointed vice-captain Theodor Gebre Selassie wore the armband for Werder. Florian Kohfeldt lined the team up in a 4-4-2 formation with Sargent and Füllkrug up front for the Green-Whites.

Werder behind for 10 minutes 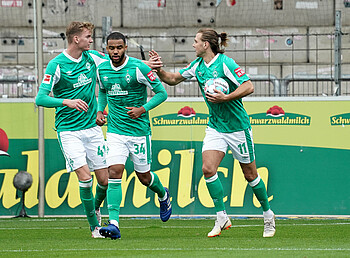 Nick Woltemade, a Werder academy graduate, made his first appearance in the Bundesliga this season (photo: nordphoto).

8th minute: Schmid breaks down the right-hand side for Freiburg and crosses to Nils Peterson in the box, but the former Werder man powers his header over the crossbar. An early warning for Kohfeldt and his team!

15th minute: SC Freiburg’s early pressure pays off as they take the lead through Philipp Lienhart. Vincenzo Grifo whips in a corner to the back post and Höler is able to keep the ball alive, finding Lienhart in the six-yard box who directs the ball into the back of the net. 1-0 to the hosts.

20th minute: The ball is in the back of the Werder net again following a low, driven effort by Schmid into the bottom left-hand corner. But it won’t count! The linesman’s flag was up for offside and the goal is ruled out.

25th minute: Ice cold from Füllkrug! Leonardo Bittencourt is brought down in the box and the referee points straight to the spot. Niclas Füllkrug steps up and keeps his cool to send the keeper the wrong way, powering home into the right-hand side of the goal. Werder are level!

40th minute: Two chances in quick succession for Werder! Josh Sargent breaks into the box from the right and shoots. His attempt is blocked and lands at the feet of Nick Woltemade who also tries an effort. Freiburg keeper Florian Müller is able to make a strong save and the ball is cleared. 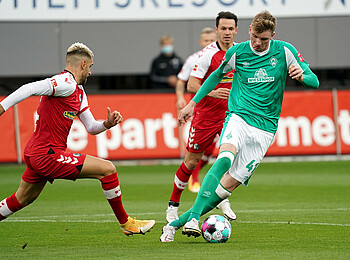 Nick Woltemade, a Werder academy graduate, made his first appearance in the Bundesliga this season (photo: nordphoto).

47th minute: Almost a second for Werder! Mbom crosses the ball from wide but it evades everyone in the box and hits the top of the crossbar! So close.

61st minute: Ludwig Augustinsson with great play down the left side as he whips the ball into the middle. Leonardo Bittencourt loses his marker and arrives at speed, but can’t keep his header on target.

72nd minute: Kwon and Schmid link up well for Freiburg and the latter finds himself free ten metres from goal on the right-hand side. Pavlenka is able to parry his effort away - an important save!

86th minute: SC Freiburg pile on the pressure, pushing the boys in green deep into their own half. A sustained period of possession ends with Höler attempting a shot from the left which is blocked, and Werder are able to hook the ball high and clear to safety.

Conclusion: A well-earned point in Breisgau! In a highly competitive game, Werder had a few opportunities to take the lead but in the end, a point is a fair reflection of the match. The hosts had arguably the better of the chances but SVW can be proud of a solid defensive display and an important point on the road. Especially pleasing from a green and white point of view was Kevin Möhwald’s comeback after his break on the sidelines due to injury. Next up for Werder is Hoffenheim at home on 25th October!

26.11.2020 / preliminary report
Your web browser ist outdated.
The web browser you are using is no longer supported.
Please download one of these free and up to date browsers.
Why should I use an up to date web browser?