SV Werder Bremen emerged 4-1 winners in an international break friendly against FC St. Pauli on Wednesday. Florian Kohfeldt’s men put in a great first half display, scoring three times, but found life much more difficult after the break. After the visitors scored the first goal of the second half, Werder were able to hit back and seal a positive result. Tahith Chong (11’, 87’), Joshua Sargent (15’) and Leonardo Bittencourt (35’) scored the goals for Werder.

As expected, Florian Kohfeldt gave match action to a few players who were lacking minutes so far this season. The Werder head coach used a 4-3-3 formation with Eduardo Dos Santos Haesler in goal behind a back four of Theodor Gebre Selassie, Christian Groß, Ilia Gruev and Felix Agu. Kevin Möhwald, Patrick Erras and Leonardo Bittencourt started in midfield, supporting an attacking trio of Tahith Chong, Romano Schmid and Josh Sargent. 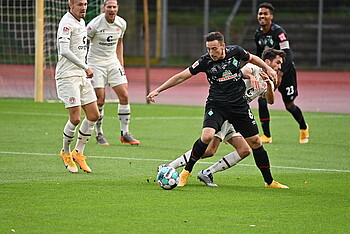 11’ min: After a cross from Agu, Tahith Chong opens the scoring with his weaker right foot. 1-0 to Werder!

38’ min: Almost another goal! Werder have four consecutive attempts at St. Pauli’s goal, with Theodor Gebre Selassie, Leonardo Bittencourt - twice - and Romano Schmid all trying their luck, but to no avail. 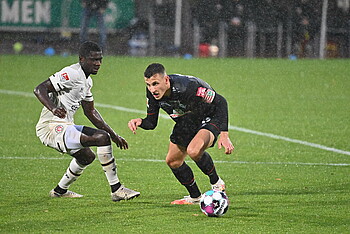 The rain came down hard during the second half (Photo: nordphoto).

59’ min: FC St. Pauli are much more switched-on than in the first half, and they are looking threatening in the Werder penalty area. Werder’s Christian Groß looks solid at the back, though, as he clears two crosses away from danger.

65’ min: The goal arrives for FC St. Pauli. The side from Hamburg are rewarded for their improved second-half performance as Boris Tashchy vollies home on the rebound.

87’ min: Tahith Chong scores Werder’s fourth and settles the match after St. Pauli’s period of pressure. Maxi Eggestein gives the ball to the winger, who does well to avoid a challenge before scoring at the near post.

Summary: With a 4-1 friendly win, Werder head into the international break on a high. A flexible Werder side was particularly impressive in the first half, playing with freedom and showing a ruthless streak in front of goal. The 3-0 half-time lead was thoroughly deserved. The heavens opened during the second 45, and the visitors looked far more dangerous in the rain. Werder withstood the storm, allowing St. Pauli to score just one goal before reasserting their control over the match. Tahith Chong scored his second late on to put the finishing touches on a good day’s work.

Florian Kohfeldt: "We were good, even great, in the first half; we could have scored another two or three. We won lots of aerial battles, we ran hard and never stood still. St. Pauli came back at us in the second period. I must honestly say that it’s not the first time we’ve let that happen – we were caught sleeping somewhat. We woke up and fought back after conceding, but obviously the second half wasn’t as good as the first. In the end, we won 4-1 and a few players showed their quality and ambition, so there were some positives today.”

Kevin Möhwald: "I’m still lacking in fitness, you could see that during the last 25 minutes when we came under a lot of pressure. I’m on the right path, though. We can build on that first half, but the second was frustrating. In the dressing room we said that we wanted to keep pressing forward, but we didn’t do that in the end. We didn’t defend right and we didn’t play with the same freedom. That’s not what we wanted, but it’s only a friendly match. The most important thing is that lots of players were able to complete the 90 minutes.”

Tahith Chong: "It’s always nice to score, especially as an attacker, but I’ve already said plenty of times that I can’t score without my teammates. For the second goal, Maxi’s pass left me completely free – they all make it really easy for me. Obviously I would prefer to start matches, but I will still give it my all when coming off the bench. I’m a really patient guy and I will try to keep improving and helping the team.”

26.11.2020 / preliminary report
Your web browser ist outdated.
The web browser you are using is no longer supported.
Please download one of these free and up to date browsers.
Why should I use an up to date web browser?