Werder fall to a 5-3 defeat at to Wolfsburg

SV Werder were beaten 5-3 by VfL Wolfsburg in the Friday night fixture. The clash between the two sides who had scored the least goals in the run up to this game saw an incredible eight goals. Werder took the lead through Leonardo Bittencourt (13’), before Baku (22’) and Brooks (25’) quickly turned the game on its head and put the hosts in the lead. Kevin Möhwald brought the scores level with his first touch of the game after being brought on in the first half (36’) but Wout Weghorst struck less than a minute later to bring Wolfsburg ahead again (37’). Following the interval, a Brooks own goal made it 3-3 (47’), but the side from Lower Saxony had the last laugh as they struck twice more (76’, 90+5’) to take all three points.

Line up and formation: Head coach Florian Kohfeldt made two changes to the side that played in Munich. Yuya Osako replaced Josh Sargent up front due to an ankle injury that the American picked up in the warm up, while Jean-Manuel Mbom replaced Kevin Möhwald. Werder lined up in a flexible 3-4-3 system. 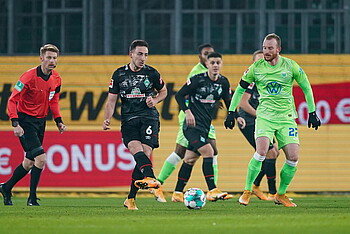 Kevin Möhwald experienced a rollercoaster of emotions after he was brought on (photo: nordphoto).

13th minute: Goal! Leonardo Bittencourt fires Werder ahead! Yuya Osako robs the ball off the Wolfsburg defence before advancing into the area. He finds Leo with a great pass, who fires the ball into the back of the net. What a start!

22nd minute: Ridle Baku evens the scores. The Wolves' first real chance leads to their first goal as Baku collects the ball and strokes the ball in from long range past Jiri Pavlenka.

25th minute: John Brooks completes the turnaround for the hosts as he rises highest to power a header into the left side of the goal. Two chances and two goals for the Wolves.

36th minute: Goal! Kevin Möhwald equalises for the Green-Whites! The midfielder rises to direct a great header into the back of the net with his first touch! It’s clear it’s going to be a great game!

37th minute: Wout Weghorst makes it 3-2. The hosts take the lead again after a quick counter-attack which the Dutchman cooley dispatches from the centre of the area.

45+1 minute: Almost every chance has resulted in a goal! But Werder go into the interval 3-2 down with work to do in the second half.

Wolfsburg have the last laugh 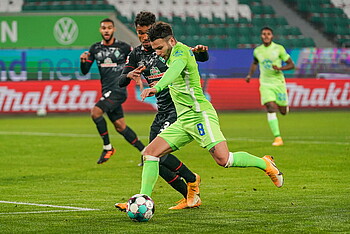 Werder were punished for defensive errors by the hosts (photo: nordphoto).

47th minute: Goal! John Brooks deflects the ball into the back of his own net to make it 3-3. Osako feeds Milot Rashica down the left-hand side who drills the ball low into the box. It hits the American defender and flies into his own net, bringing the Green-Whites level.

56th minute: Arnold finds himself in space and lets fly but sees his effort miss the target. A warning sign!

60th minute: Rashica goes close! The Kosovan dribbles down the right and fires a shot low and hard at the near post, but it ends up going narrowly wide.

76th minute: Wout Weghorst scores to put the hosts in the lead again. He jumps to head in Roussillon's cross, putting the Wolves ahead for the third time in the game.

90+5 minute: Bartosz Bialek scores at the death to make it five. With Kohfeldt’s men pushed up searching for a late equaliser, Wolfsburg quickly counterattack at the end of which Bialek taps in to seal the three points for the Wolves.

Match summary: It’s difficult to draw conclusions from a game like this. Naturally, five goals are too many to concede; on the other hand, Wolfsburg proved fiercely clinical in front of goal. At the other end, Werder could have had equally scored five themselves. A high-quality encounter, from which the Green-Whites can learn plenty, while taking the positives into next week’s match against Stuttgart. A solid performance from Kohfeldt’s men, but ultimately no points to show for it.