Preview of the Bundesliga clash away at Wolfsburg

Ömer Toprak and the SVW defence will be facing a tough task against a strong Wolfsburg attack (photo: nordphoto).
preliminary report
Thursday, 26.11.2020 / 16:07

SV Werder Bremen will travel to face VfL Wolfsburg on Friday, who remain undefeated in the league so far this season (20:30 CET). A victory for Werder would see them not only inflict the first defeat of the season on the hosts but would also see the Green-Whites pass them in the Bundesliga standings. Three points would be a welcome change for head coach Florian Kohfeldt’s side after five consecutive 1-1 draws, a feat that equalled the record for the most consecutive results in the Bundesliga.

The squad: “Not much has changed in terms of available players,” reported Florian Kohfeldt at Thursday’s pre-match press conference. While all the players from last weekend’s draw in Munich are available, Niclas Füllkrug will not be ready in time to travel to Wolfsburg. Additionally, Milos Veljkovic will be rested for another week in order to prevent the risk of injury. “We don’t want to introduce him too quickly,” emphasised Kohfeldt with reference to the busy schedule ahead in the run up to Christmas. However, the coach didn’t specify whether there would be any changes compared to last week. “None of the players who featured in Munich gave me any reason to change things round. However, Wolfsburg are a different opponent and pose a different set of challenges, so we’ll need to take that into account.”

Being an unpleasant team to play 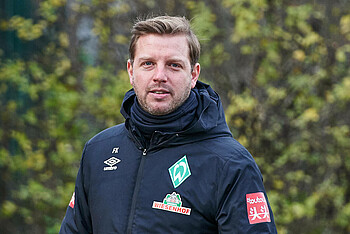 Florian Kohfeldt is expecting a compact Wolfsburg side (photo: nordphoto).

The head coach on the game: Florian Kohfeldt made his opinion clear that Wolfsburg have no clear weaknesses within their side. "They are an extremely compact, strong and physical team," said the 38-year-old, “and in Wout Weghorst, they have one of the best centre-forwards in the league.” In view of the individual strengths of VfL, Kohfeldt stated that it will be a “big challenge” for SVW on Friday. “However, we saw last weekend that we are also a very unpleasant side to play,” he emphasised. He doesn’t necessarily expect an even game over the full 90 minutes tomorrow, but he is anticipating two well-matched teams: “I think it should be an exciting game from a tactical point of view.” Against FC Bayern, Kohfeldt watched a solid and well-organised performance from the Werder defence. “We have to make sure we stay dangerous throughout the game,” he concluded, making the expectations he has of his players clear.

The record so far: In the last match against VfL Wolfsburg on 07.06.2020 (matchday 30 of the 2019/20 season), SV Werder were beaten by a late Wolves winner. The Green-Whites matched Wolfsburg for most the encounter at the wohninvest WESERSTADION until Wout Weghorst struck in the 82nd minute. The unfortunate 1-0 loss was a big setback in the relegation battle. In the reverse fixture earlier in the season however, SVW came away 3-2 winners after a Milot Rashica brace (13’, 83’) and another from Leonardo Bittencourt (36’). 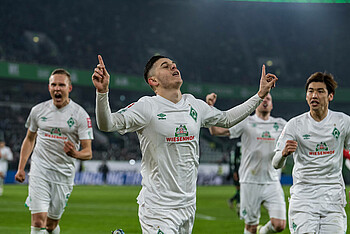 Seeking a 20th win: SV Werder have a slight advantage in the head-to-head-record; 46 matches against the Wolves have resulted in 19 Werder wins, 8 draws and 18 defeats. Before last season’s fixture, Werder had won eight consecutive meetings with Wolfsburg stretching back to November 2015, the last time that Wolfsburg emerged victorious in the tie.

In-form teams: Wolfsburg beat Schalke 2-0 on the previous matchday and remain undefeated in the current season. It has also been a while since SV Werder were defeated, with the only loss of the season coming on matchday one against Hertha Berlin. Werder are unbeaten in six matches after the match away in Munich, although Florian Kohfeldt’s men will be hoping to take three points home after drawing the last five matches, all by the same 1-1 scoreline. Another of the same result would see Werder set a new Bundesliga record.