Nuri Sahin on new relationships, new styles of play and settling in

It was a step out of the comfort zone for Nuri Sahin. Having been at Dortmund for many years, he knew everything about the club: the fans with their legendary Südtribüne, their philosophy, their style of play, and the city aswell. He was at home at BVB. However, the midfielder decided to make a fresh start, and made the switch to SV Werder Bremen. Now, a year and a half later, he looks back on what was a “successful” move.

“I was really at home in Dortmund, and I still am today,” said Sahin. At BVB, he became the youngster ever player to make a Bundesliga appearance in the club’s history. He went on to win the league and the cup during his time there, as well as making it to the Champions League final. However, he has no regrets about his decision to move to the Osterdeich. “It’s all gone exactly how I imagined it would. I knew that I was coming to a traditional club, with a fantastic stadium and amazing fans who understand the game. I also knew that I would have a coach I could learn a lot from."

Sahin: “I had a lot of respect for the squad” 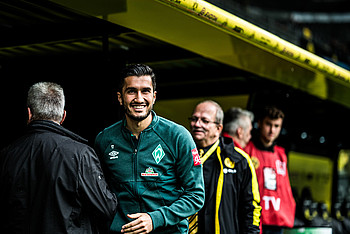 Sahin has appeared in almost every single Bundesliga match for Werder so far this season, missing just one game due to suspension. However, he has vastly improved since he first arrived at the club. The 31-year-old made the switch to SVW as a last minute transfer, therefore missing out on having a full pre-season with his new teammates. Now he understands exactly what the coach wants from him. “We did a huge amount of work on tactics this pre-season. That was very new to me,” said Sahin. “It helped me understand how the coach wanted us to play which was very important.”

However, the midfielder had to get used to his new surroundings off the pitch, as well as on it. Sahin was a key member of Dortmund’s squad for a number of years, and was seen as a leader among the dressing room. After seeing a generation of players come and go at BVB, he was now a new signing. “I had a lot of respect for the squad and made an effort to socialise with them because I didn’t know many players there,” Sahin reminisces. Moving out of his comfort zone turned out to be a success for the 31-year-old. “It worked out well for me, and I would say my move to Bremen was 99% of what I expected it to be.”