Views on the Wolfsburg game

Three away goals were not enough for SV Werder to come away with any points from the clash against VfL Wolfsburg on Friday evening. The Green-Whites were defeated 5-3 after an action-packed game. “I’m taking some positives away from the game, but of course I’m disappointed because I felt that we could have won the game,” said head coach Florian Kohfeldt after the match. 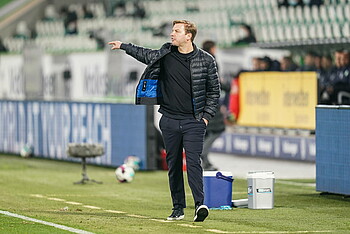 Florian Kohfeldt was not satisfied with his team’s defensive performance (photo: gumz/nordphoto).

Florian Kohfeldt: “There are basically two ways of looking at it. Football fans probably had a nice evening today because there were two passionate teams and a lot of action on display. But from the professional, more analytical view, it’s not as nice. After we went 1-0 up, we had the advantage and should have pulled away really. Offensively I would say it was our best performance of the season so far but defensively we looked a lot weaker compared to recent weeks. Nevertheless, we didn’t give up and showed a lot of desire to get back into the game. We gave everything we had, the passion was 100% there. It’s not a big setback in the big picture, but we should let it slip us up.”

Leonardo Bittencourt: “When you score three goals away from home, you should be getting points from the game really. I thought we conceded goals too easily, which was in contrast to the way we’ve been playing in recent weeks. It’s always the case that you’ll have an off day and unfortunately for us, that day was today. It didn’t have to happen, but we’ll move on.”

Maximilian Eggestein: "The defeat today is a difficult one to explain. We conceded two headed goals from crosses which we have to defend better. We also conceded very soon after scoring which shouldn’t be happening either.”

Ömer Toprak: "In the first half we gave away the lead but despite coming back to equalise twice, we just didn’t play well enough in the end. There were too many mistakes and we’ll have to go away and analyse those. We gave them too much space in the final third.”

On the challenges ahead:

Florian Kohfeldt: "I don’t need to build anyone up. We’ve developed a mental stability in the last two games. Today we could have ended our run of draws with a win. We’re not easy to beat. We have to draw the right conclusions and do better against VfB Stuttgart but until then, we have to work hard."

Maximilian Eggestein: "We’re more stable this season and won’t let ourselves spiral because of one game. We could have gotten something; Wolfsburg didn’t have more chances than us. We need to continue now."

Leonardo Bittencourt: "I don’t believe the defeat will set us back.  The team I know will be able to shrug this off. Maybe not today or tomorrow, but at the latest when we start preparations for the next opponent. We need to work on these mistakes."